Fireworks at the Panel discussion on Hate speech, Fake news bill in Nigeria 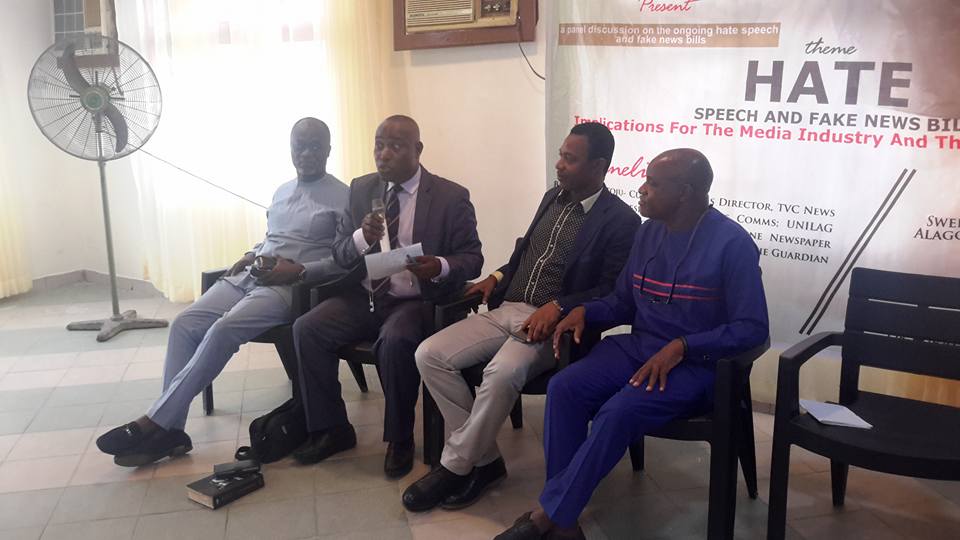 The panel discussion on hate speech and social media bills in Nigeria, implications for the media industry and the society at large which held on November 26, 2019 was a moment of awe and fireworks.  Everyone left with a shift in their mind-sets with regards to the appropriateness and timing of the bills being considered by the national assembly in Nigeria.

The event which was put together by Africa Foundation for Young Media Professionals and African Centre for Media and Intercultural Dialogue (ACMID), featured in its panel discussion Suraj Olunifesi, a lecturer at the University of Lagos (UNILAG); Tunde Abatan, editor of NewDawn online newspaper, and Martins Oloja, editorial board member, The Guardian.

Given the fact that the panellists were season journalists, broadcast and academic from the foremost media department in Nigeria, no one was surprised at the quality of the contents and interactions among the participants.

Prior to the outcry against the bill sponsored by Senator Sanni, the death sentence attached as penalty was of grave concerned to everyone. After the outrage across the country, Abdullahi Sani, sponsor of the bill, promised that the death penalty aspect will be reviewed.

Olunifesi, who is also the executive director of ACMID, said the ‘’social media and hate speech bills are anti-people and the society at large’’. Dr Suraj also said  “All over the world, the trend has been civil laws, not damaging or criminal laws. When the government has the power to gag the media and the narratives, it leads to impunity,” Olunifesi said.

Many of the participants as well as the panellists believed a bill that requires setting up of commission amongst other money consuming exercise is a waste of time and resources of the country especially so when funding had become an issue.

Media stakeholders on Tuesday, called on the Nigerian Senate to scrap the bill seeking to regulate social media and the controversial National Commission for the Prohibition of Hate Speeches bill.

A general consensus championed by Martins Oloja, Executive Head of Editorial Board of The Guardian was that the two bills threatened freedom of the press, speech and expression as guaranteed by the country’s constitution. Given the timing and the speed at which the bills went through second reading, while other important bills had been ignored for years, stakeholders at the panel discussion  alleged that the government has an ulterior motive it seek to achieve with the bills.

Tunde Abatan, a panellist and Editor of NewDawn Newspaper also condemned in its entirety the creation of the proposed creation of ministries to enhance the hate speeches bill. He said Nigerians must speak agains such obnoxious laws. A dimension Dr. Suraj also brought in was that the proposed Social media Bills was plagiarized from Singapore without much inputs of the sponsor. Suraj therefore called for ‘the arrest of the sponsor for intellectual theft of idea’

Oloja,  on his own part considered the two bills as ‘misplaced priorities and  unnecessary in management of country resources at this time’’ Oloja suggested the ideal thing government ought to emphasis now is need for media self regulation’’. For such bills to be promoted at this time calls for a lot of suspicion as government may have hidden agenda not known to the generality of the people.

Both Martins Oloja and Dr. Suraj also stated ‘‘looking at the sponsors and supporters of the bills call for a lot of distrust’’.  Martins Oloja and many of the participants who contributed like Dr Okunade of the department of Mass communications, Caleb University believed  “The most important dividend of democracy is freedom, when that is curtail, there is no democracy,” Oloja added.

Bishop Oscar told the audience that the lawmaker who sponsored and supported the bills deserved to be recalled by their constituents. The possibility according to Bishop Oscar was that “They don’t know what they are doing’’. The purpose of going to the Senate is to serve as mouthpiece and representative of the electorate and not to present hidden agenda

Yinka Olaito, the Executive Director of Africa Foundation For Young Media Professionals maintained ‘‘Nigeria is a democracy and every attempt by the government to cage the media and the citizens would be an affront against the wills of the people’’.

Martins Oloja, in his conclusion said ‘‘the current social media bill debate by the national assembly is anti- people’’. He further stated ‘‘an attempt to pass these two bills is nothing but government’s effort at caging the will and the voices of the people.